Composition of sketches of Siberian (tristis) and W European (colybita)
Mike has taken a special interest over two decades in the Chiffchaff races that winter around the more or less frost free marshy areas in Torbay. Many hours have been spent studying, sketching, photographing, videoing and sound recording these birds. Most of the birds are of the ‘western’ Common Chiffchaff race P.c. collybita small numbers are the Siberian race of Common Chiffchaff P.c. tristis and some are probably Scandinavian race of Common Chiffchaff P.c. abietinus – this race is virtually impossible to positively identify without DNA samples. There are also probably intergrades (hybrids) of presumably Scandinavian x Siberian, so all in all quite confusing! Here are some sketches of various birds seen around Torbay. 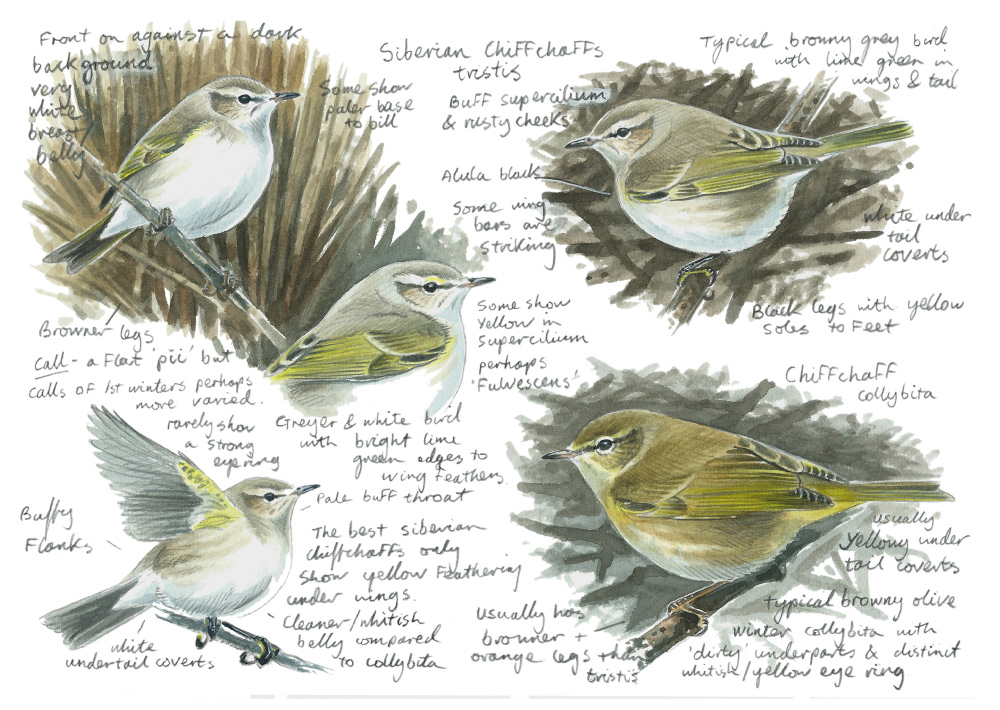 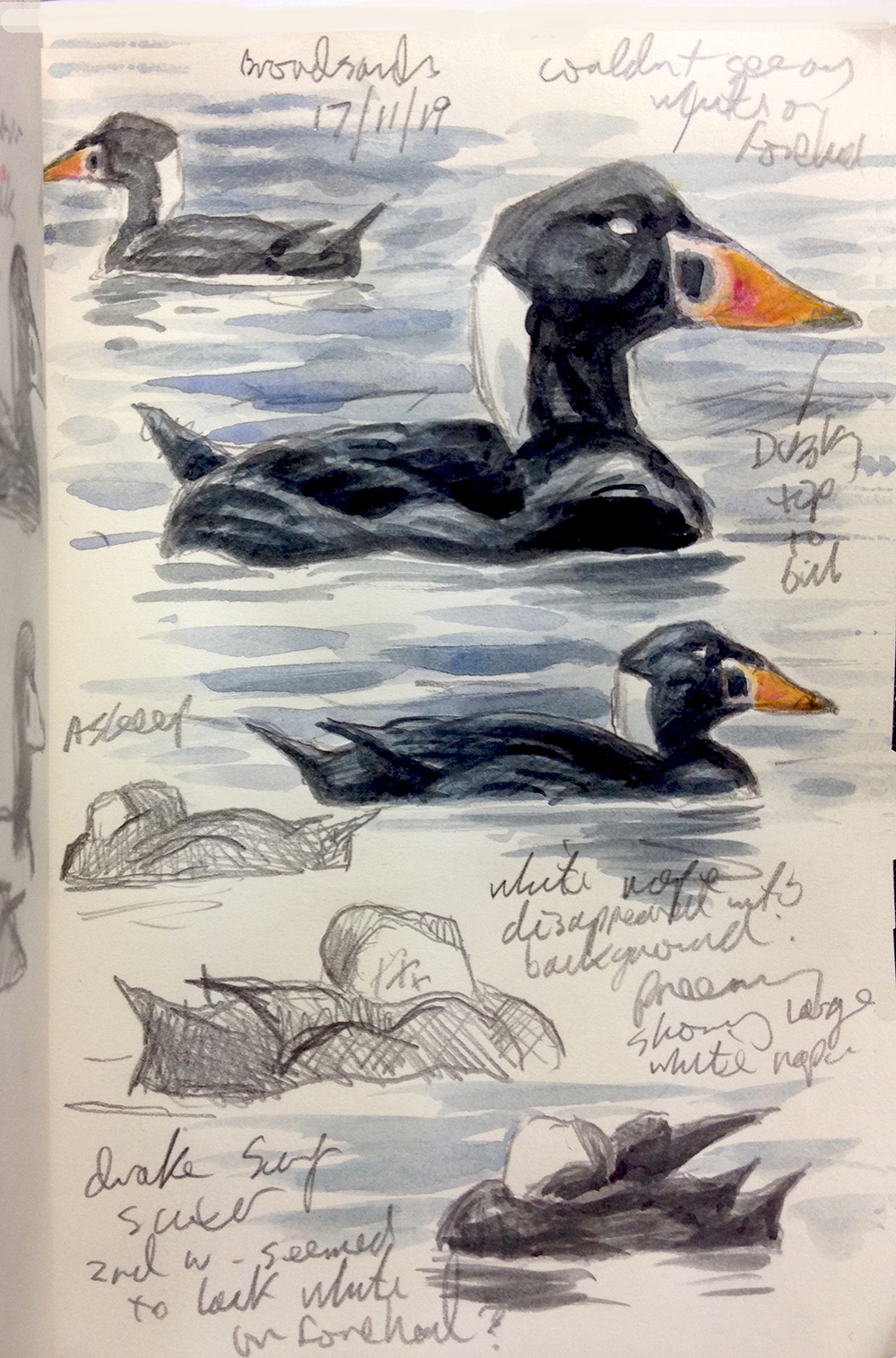 17th November 2019
A regular check of the sea off Broadsands found me scanning a distant flock of Common Scoter, the birds were constantly diving. As the birds popped up from their dive I was thrilled to pick out a male Surf Scoter amongst them. The large white patch on the back of its head was striking as was the bright bill – in contrast all the other scoter were 1st w male/female or adult female Common Scoters so very brown and dull.

The scoter flock eventually drifted closer enabling me to make some more detailed field notes. I consider the bird to be a 2nd winter drake as the it lacked the white fore crown of a full adult and also showed a little dark on the bill tip.

Tor Bay area has proven to be the most regular site in Devon for Surf Scoters with 12 records since 1990 – ten of those found by myself!

1st record for Devon
Pacific Diver was first recorded in Britain and Europe in 2007 in the seemingly unlikely location of a reservoir in Yorkshire and then perhaps more likely but still on an inland reservoir in Pembrokeshire. There was the realisation among birders that this species could turn up anywhere! Surely coastal areas in the west and hopefully south west would be better bet to find one? It wasn’t long before more were found – including a returning individual to Mounts Bay, Cornwall which I successfully travelled to see.  I became determined to find one in Devon, during the following years some good concentrations of close range divers in Torbay heighten the possibility of one appearing, every one diligently scrutinised.

After a series of winter storms on the 16th February 2017 my efforts were rewarded as I found this 1st winter Pacific Diver off the headland at Broadsands, the bird remained until the following day, conveniently often in the company of a Black-throated Diver.

I was initially over cautious on the birds identity putting it down as a small, abnormal Black-throated Diver, as the bird did show a small flash of white toward the rear flank on some dives. However a quick return home to check videos and photos the alarm bells started to ring – I quickly returned to Broadsands to clinch the rest of the features confirming this bird to be a Pacific Diver – the first record for Devon. 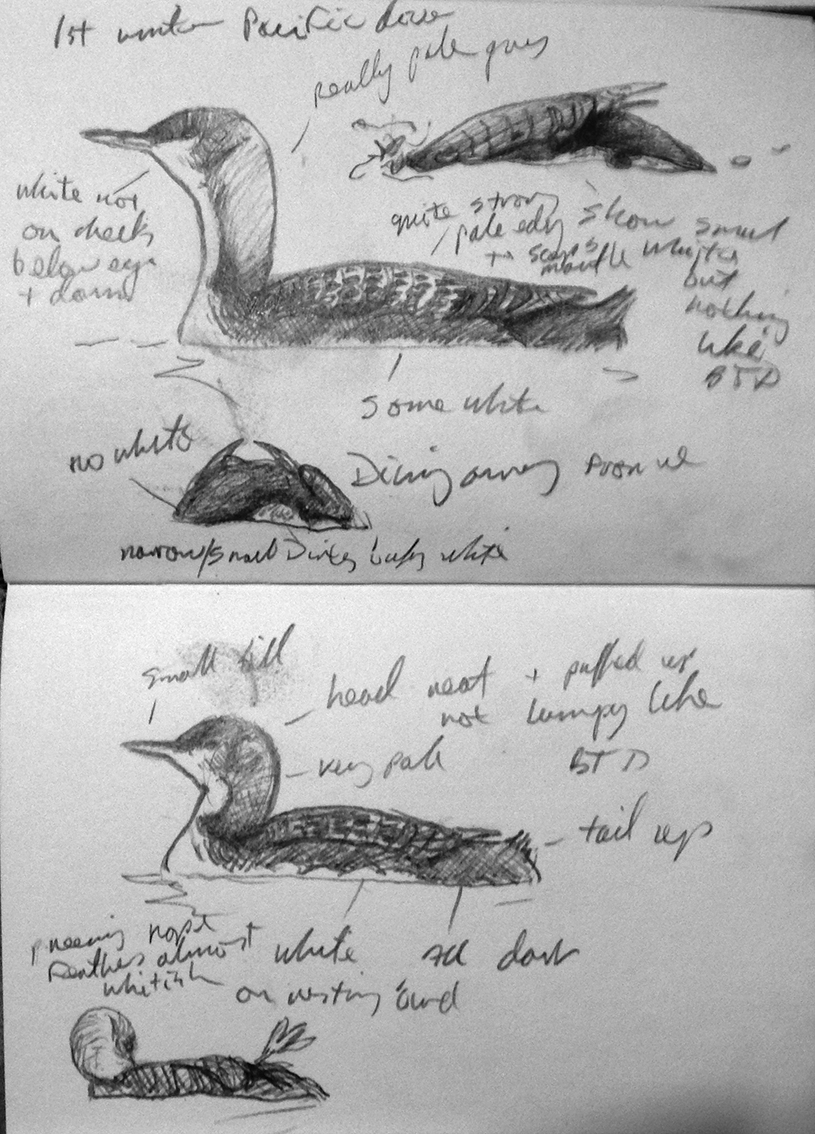 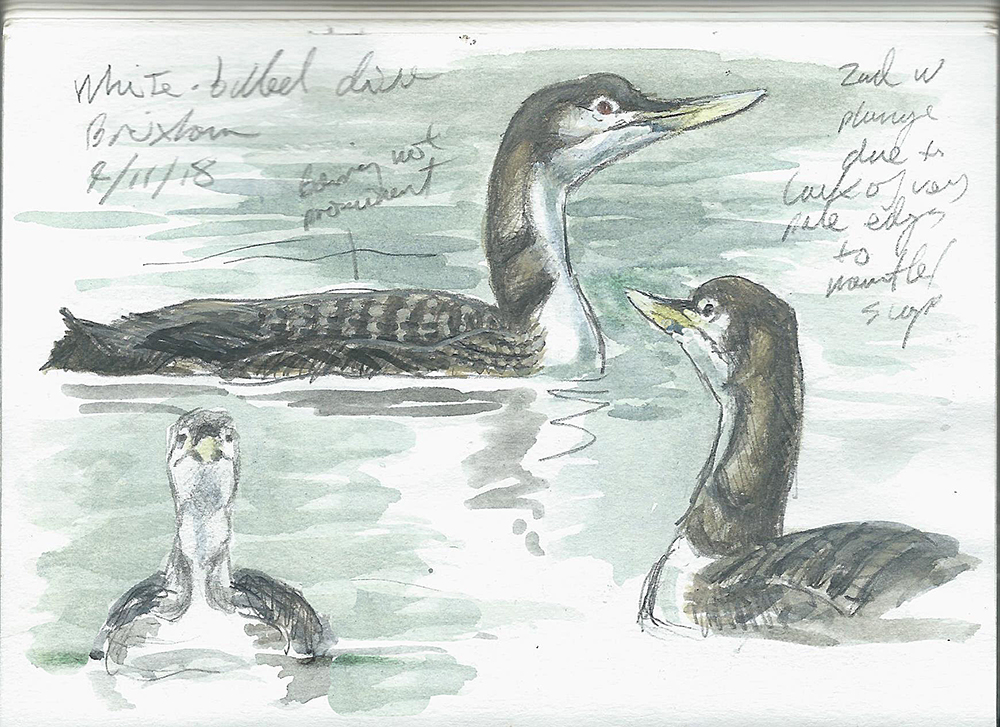 4th November 2018
A day of really heavy rain put me off going to Berry Head for a seawatch, instead I waited for a bit of a clearance and popped down to sit in the beach shelter at Shoalstone car park to see if anything had been pushed into Tor Bay on the strong southerly winds. It wasn’t long before I picked up a distant diver in the murk, immediately I could see it was pale necked a good feature for White-billed diver but over many years I had seen numerous Great Northern divers with very similar plumage. The diver was actively diving and tricky to relocate in the rain and when I did – it dived almost immediately. Eventually it decided to rest and preen, I was sure the bill shape and colour looked good but it took another 10 minutes and growing excitement on my part before I nailed the features enough to be certain it was a very rare south coast White-billed Diver. I quickly phoned the news out and was soon accompanied by a growing group of birders. The bird remained until dusk but was not seen the following day. This was only the 4th record of W-bD for Devon and completed the full set of all five diver species self found by myself in Torbay, it took 46 years of birding the bay to do that! 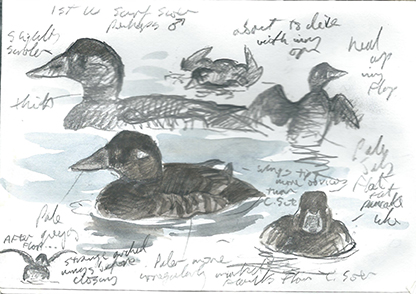 December 2016
After picking this first winter Surf Scoter (initially unable to sex the bird as a male or female) in a flock of Common Scoters, I visited several times making notes as the bird moulted into a 1st winter Male and then into a 1st summer plumage. 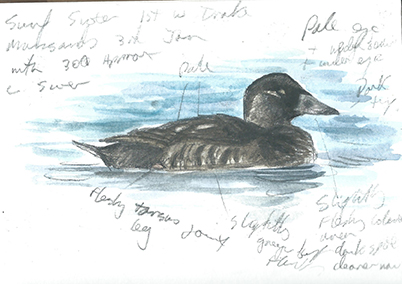 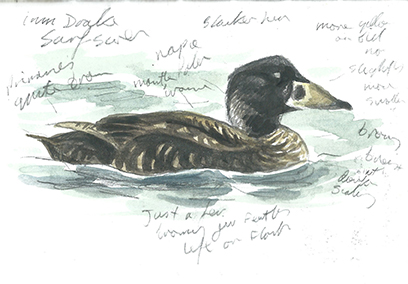 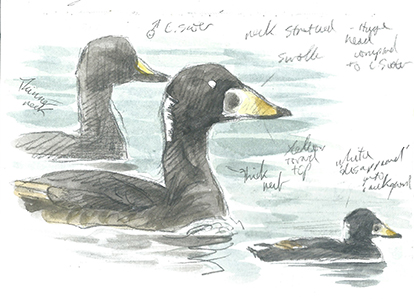 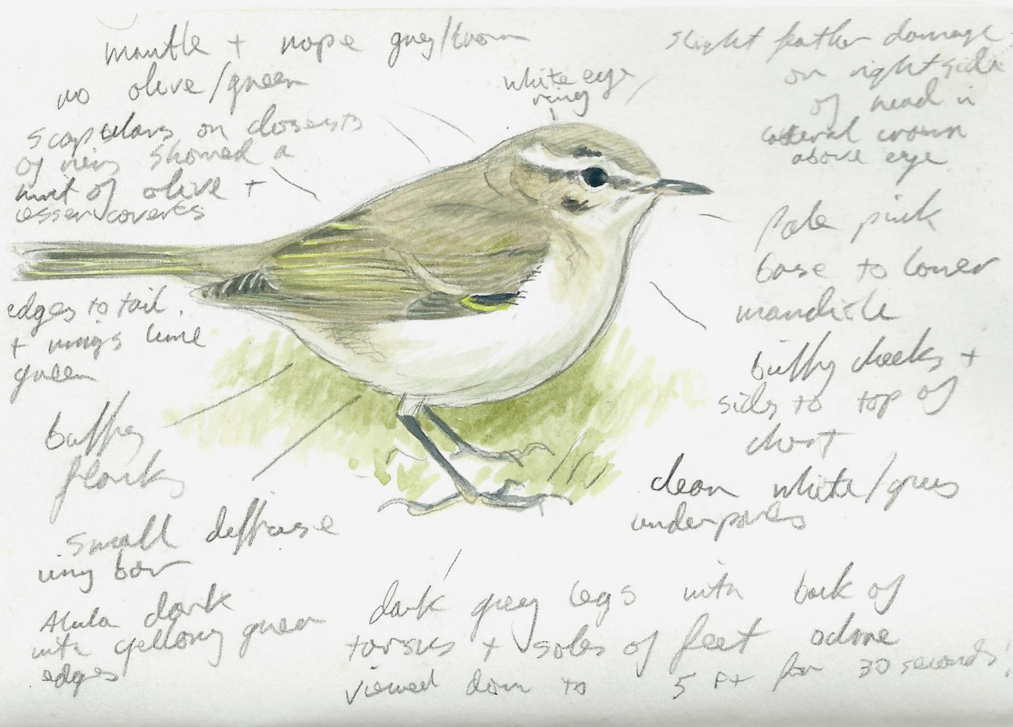 4th January 2005
Occasionally wintering chiffchaffs like this Siberian chiffchaff are very confiding and feed in the open on this occasion on the grass beside a marshy ditch. This behaviour is much more likely during really cold spells when the water in the reedy ditch is frozen. It was possible to identify several different individual chiffchaffs by worn or missing plumage features. 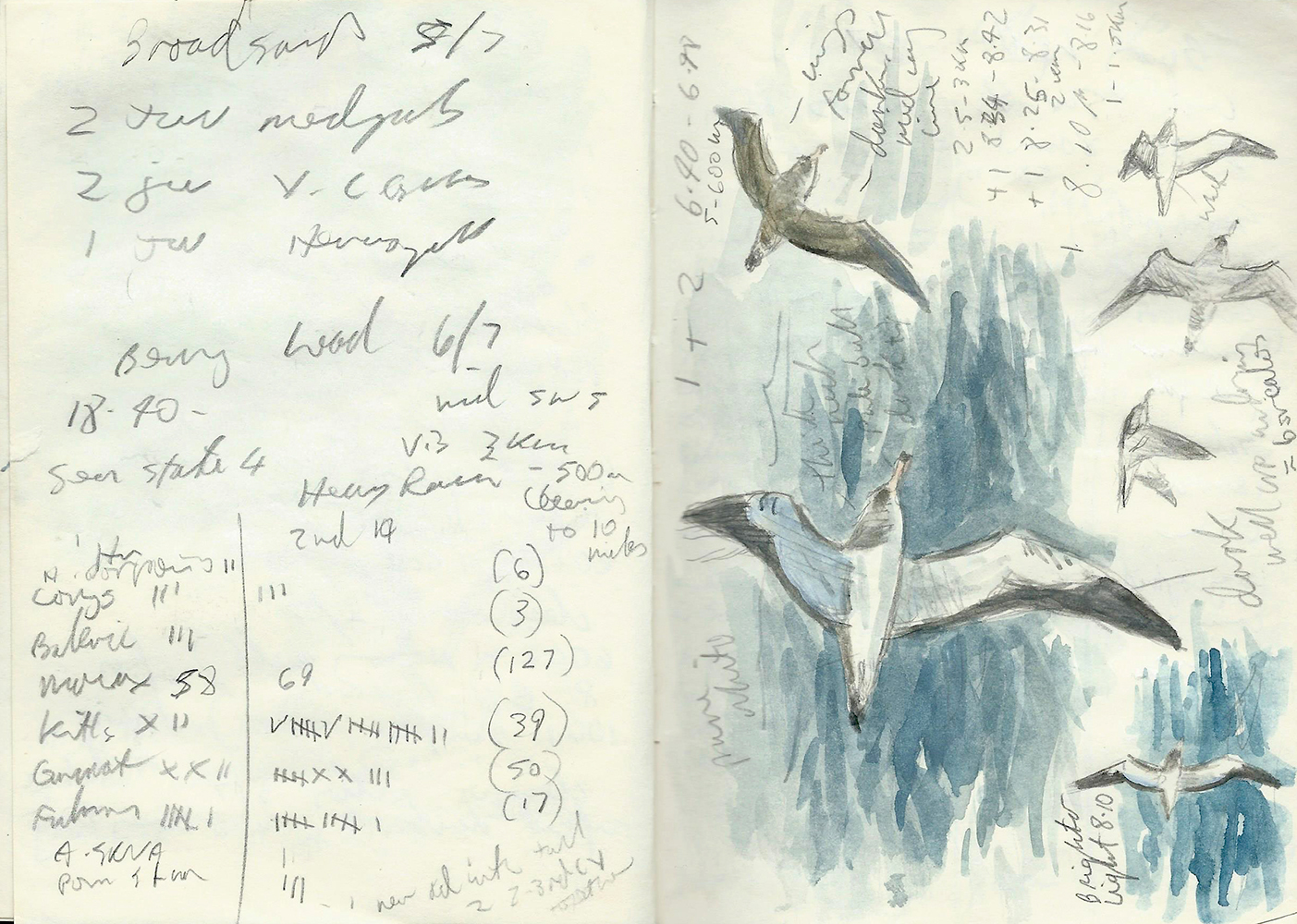 6th July 2011
‘Big Shearwaters’ are annually recorded at Berry Head but Cory’s are much less predictable than Great Shearwaters. It’s nice when either species passes reasonably close, as did a few of the Cory’s during this evening – evening light is always much better than the morning light at Berry Head. 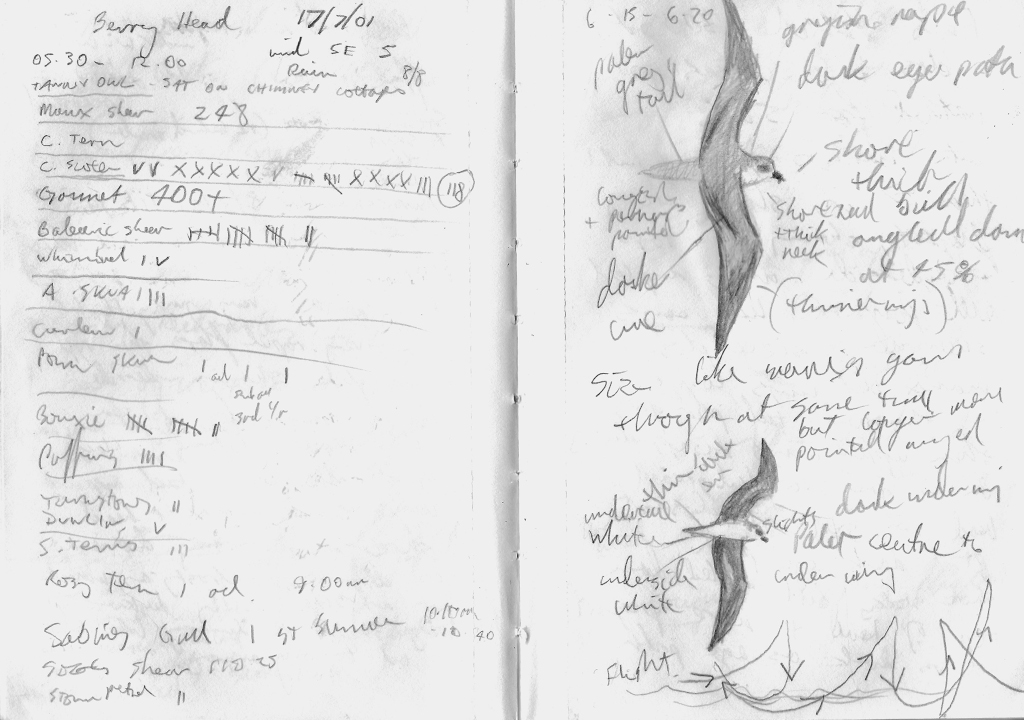 17th July 2001
Three of us settled in for a wet windy July morning at Berry Head, this Fea’s type petrel came through with a small group of Manx Shearwaters giving us all one heck of an adrenalin rush especially Bill Macdonald who seemed to take an age to get onto the bird! The dynamic towering arcing flight gave us a prolonged viewing time. 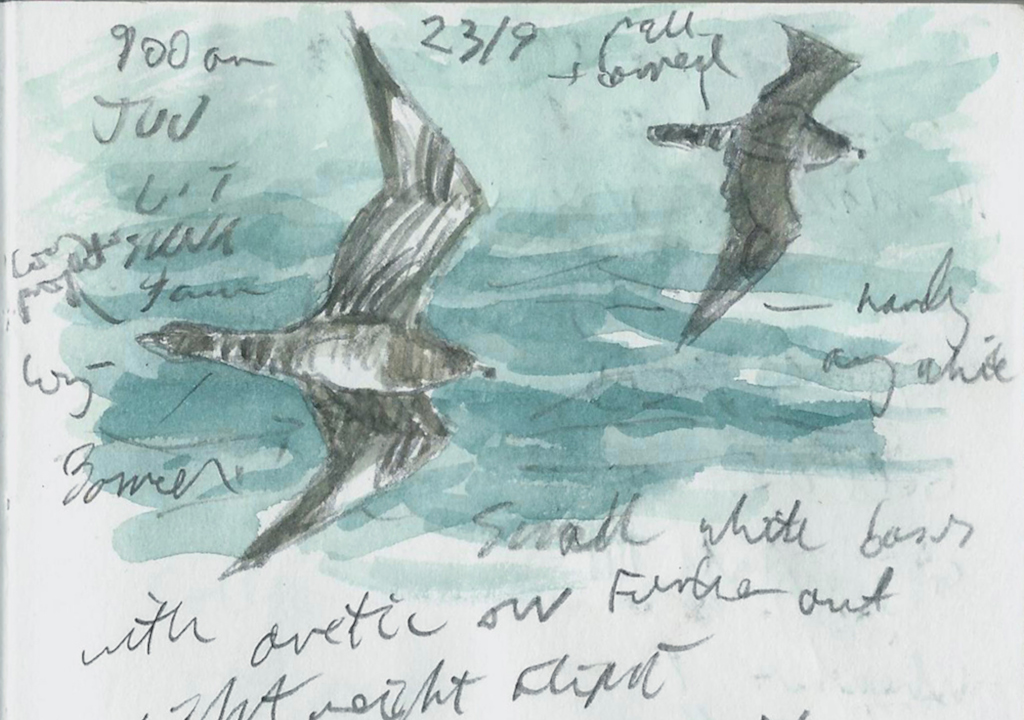 23rd September 2012
‘The Nose’ was for many years the chosen seawatching spot for many in south Devon, but since the SW Water clean sweep project getting rid of all of our raw sewage outfalls it has never been the same. However given the right winds it can still produce some good, close views of skuas like this juvenile. 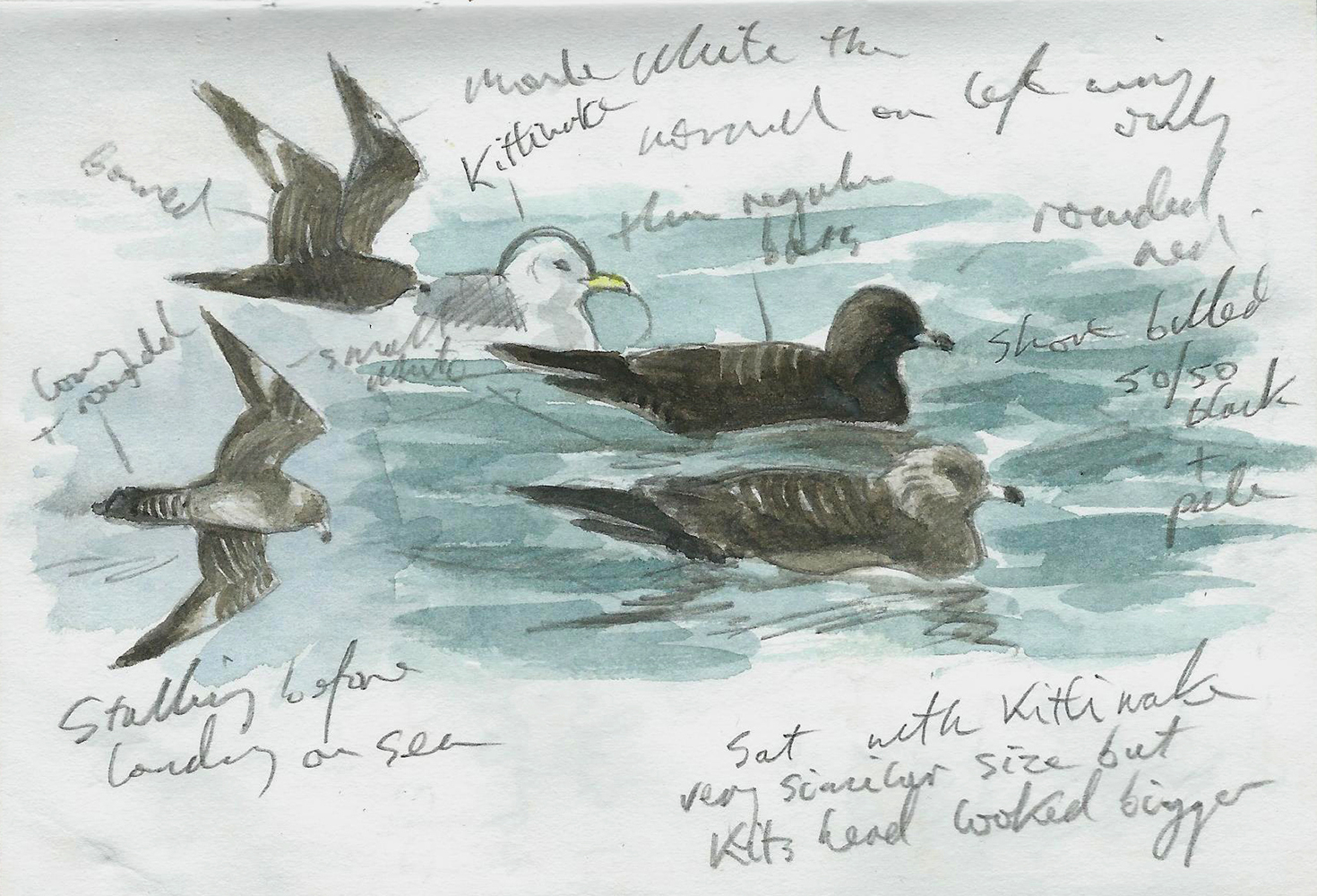 29th August 2012
As a regular seawatcher I will check every skua that passes by. Juvenile long-tailed Skuas are hugely variable in plumage, and often difficult to identify – but have a rather soft nature to them compared to the other skuas. This pair of juveniles flew in and sat on the sea with a flock of Kittiwakes, any other skua species would have sent the Kittiwake flock scurrying off in all directions in a hail of ‘KITTYWAKE’ calls. Kittiwakes are perhaps better at identification than we birdwatchers are, they knew from a distance this pair meant them no harm! 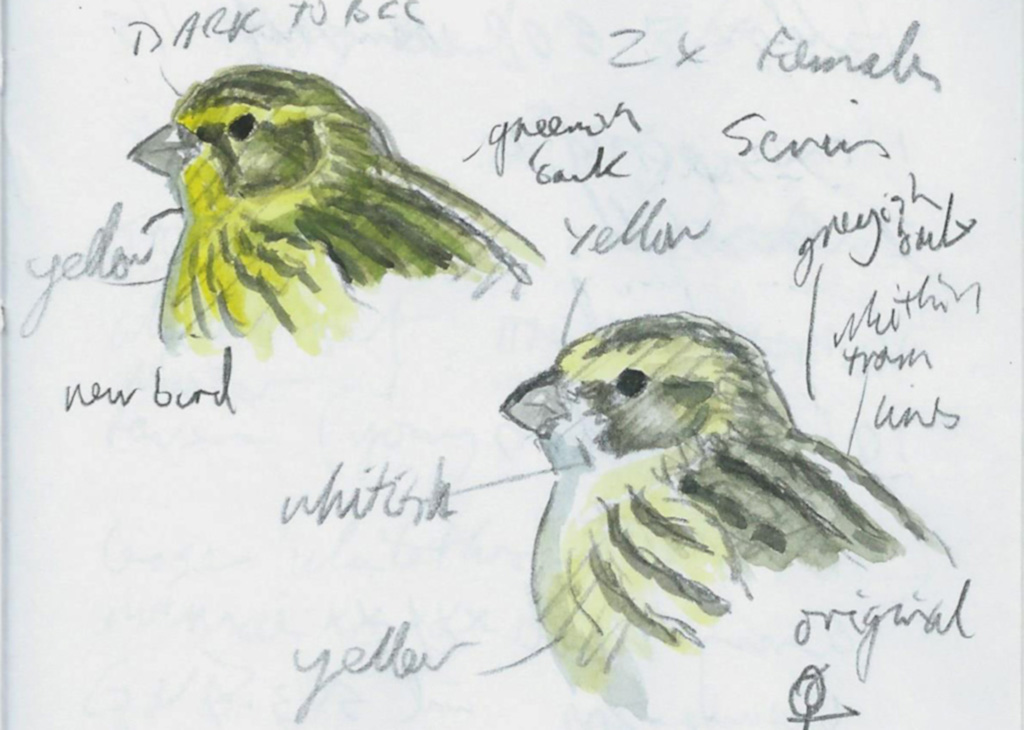 29th April 2007
A day after a male Serin was found at the holiday park at Berry Head I found two females at the same site – very different looking birds. One of the females stayed with the male, built a nest and settled for a few days before a severe storm blew the nest out, the birds moved soon afterwards. 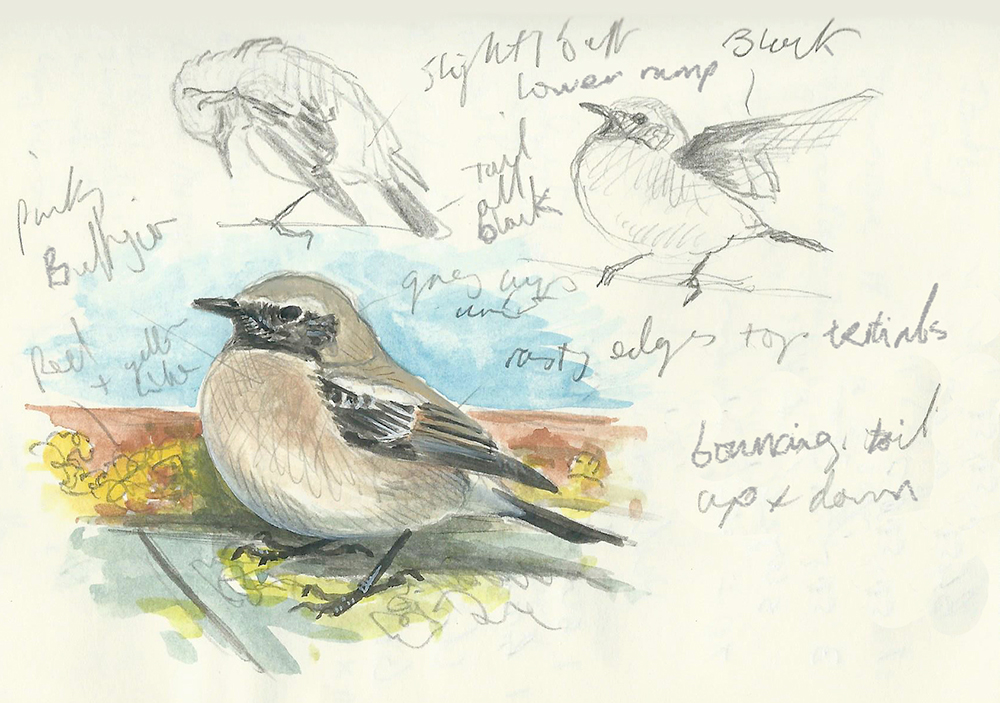 18th November 2011
A call from Paul Albrechtsen of a dark-throated type Wheatear at Mansands had me dashing off to see this lovely first winter male on the roof tops of the cottages. It stayed around for a few days and was seen by many. 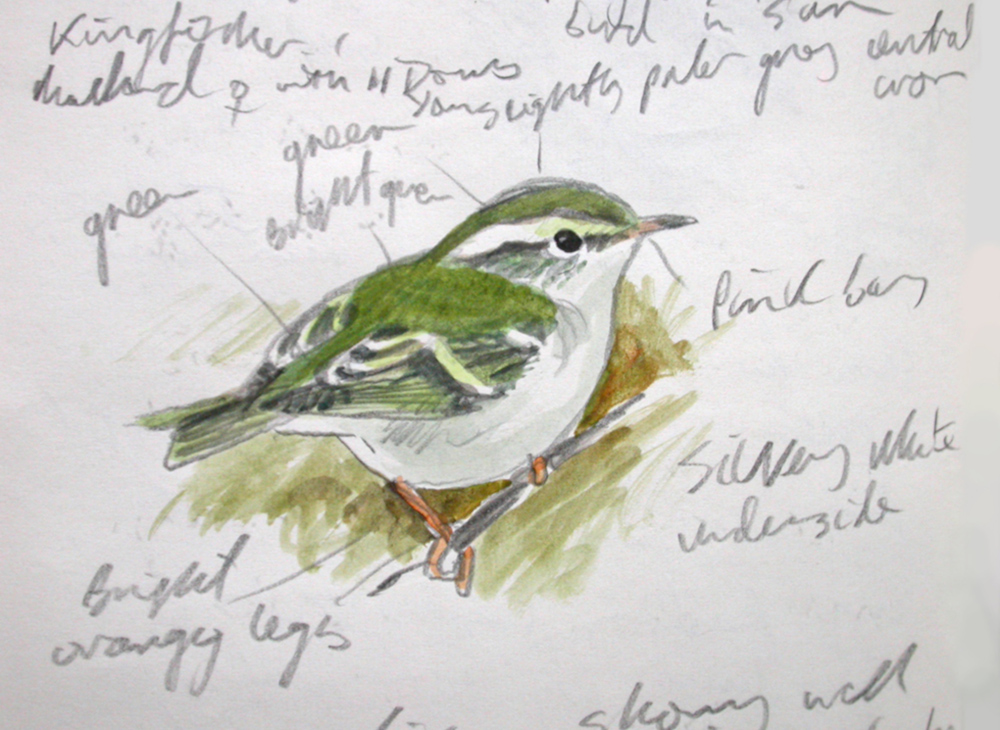 December 2007
As birders we almost expect to see and hopefully find a Yellow-browed Warbler every autumn even in Devon, this wasn’t the case when I started birding in the mid 1970s they were still a really rare bird then. Now it’s almost a game to see how many I can find each autumn, my best tally was 23 all in South Devon and mostly Torbay in 2016. 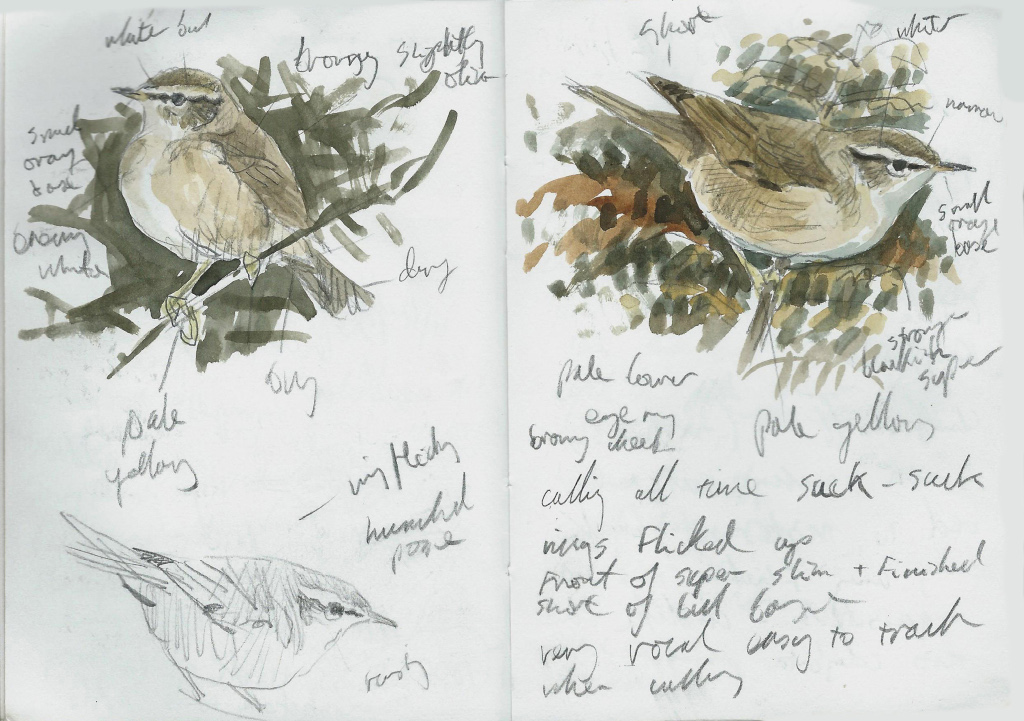 11th November 2013
One of those incredible overhead migration days with 15,000 or more Redwings passing over, for a birder these days are always worth lingering as something else usual turns up on this occasion I picked up the soft ‘tecking’ call of a warbler in a dense area of Bracken. It eventually showed itself as the suspected Dusky Warbler. I love finding my own rare warblers, they are usually tricky and unobliging but that makes them even more exciting to identify. This was my 3rd Dusky Warbler find in Torbay. 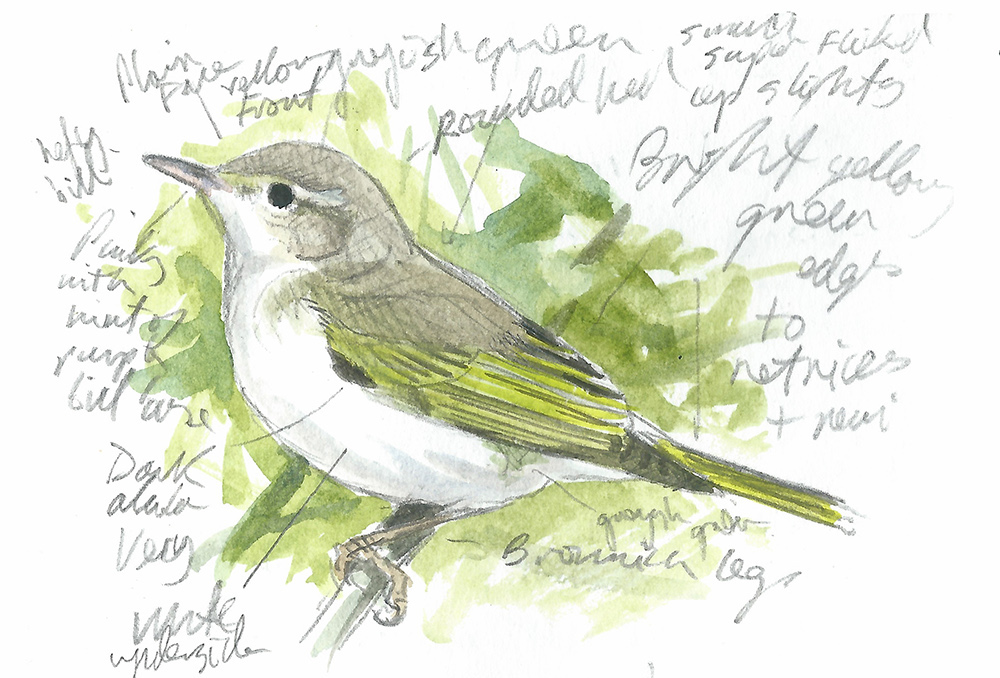 29th August 2018
Quite a thrill to find this rarity flitting around the trees in the bottom of the Quarry, luckily it called several times soon after I found it enabling me to identify it and get the news out quickly as a Western and not Eastern Bonelli’s – there again either would have done! It only lingered about 1.5hrs, enabling about 4 other people to come down to see it. 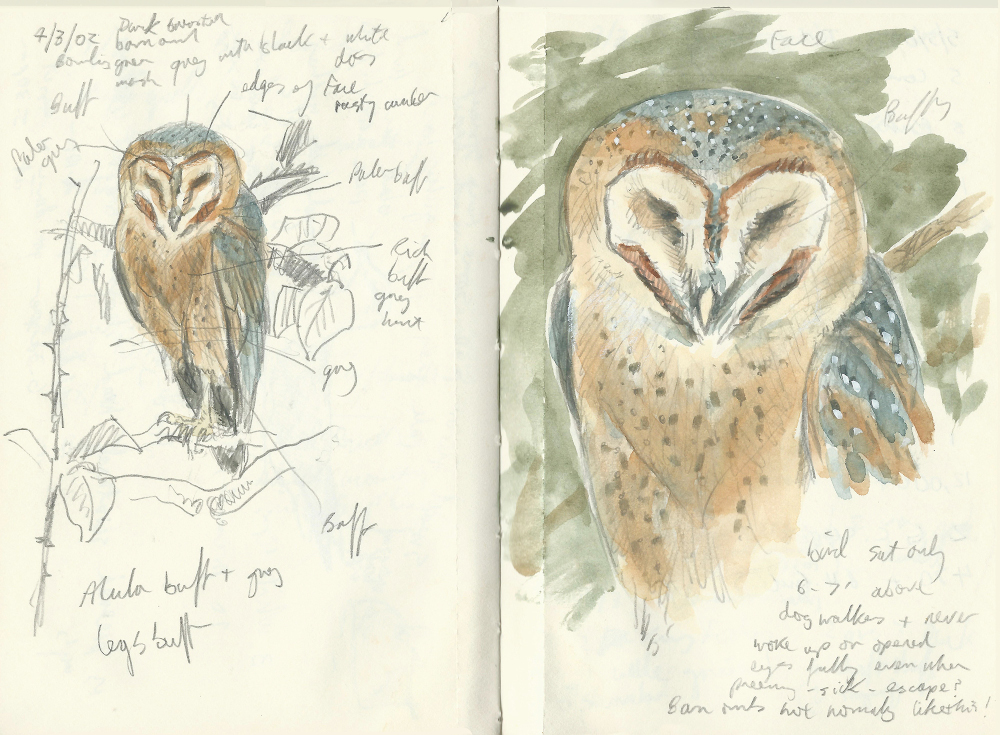 4th March 2002
A particularly tame bird sleeping in the hedge right beside the road, lovely subtle colours. I’m dubious about its origins and have seen photographs taken in Devon of young Dark-breasted Barn owl chicks in nests with normal looking barn owl chicks! 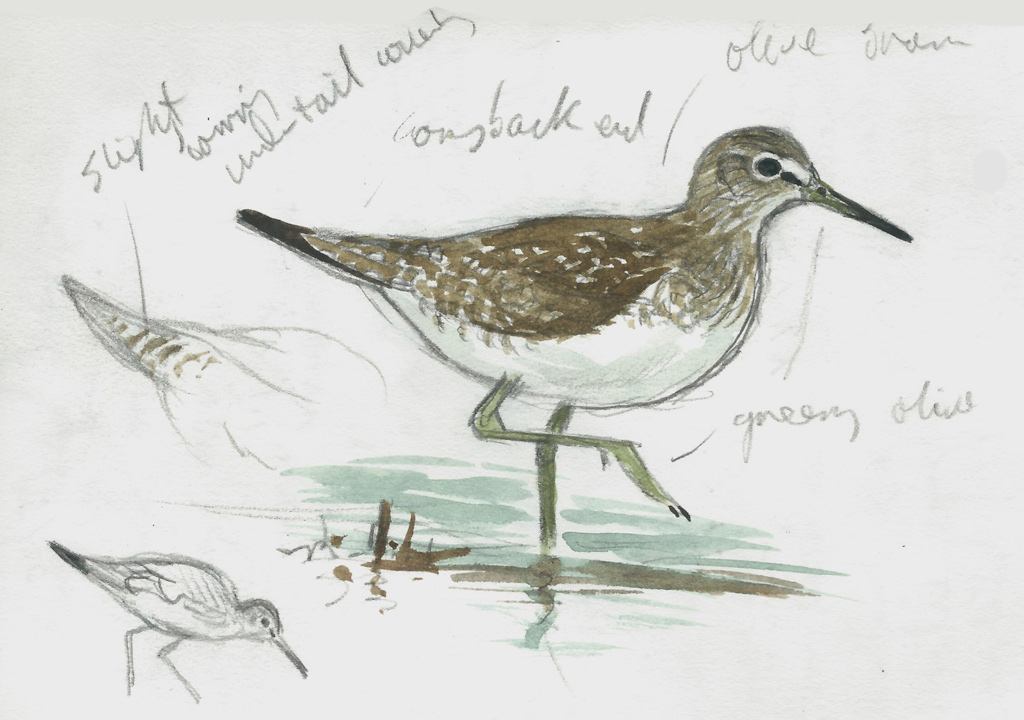 15th October 2010
I don’t twitch too many birds even in Devon but after a couple of dismal October days at Berry Head I popped over for this bird. For a time was the only person watching it a great and deserved find by Steve Waite. 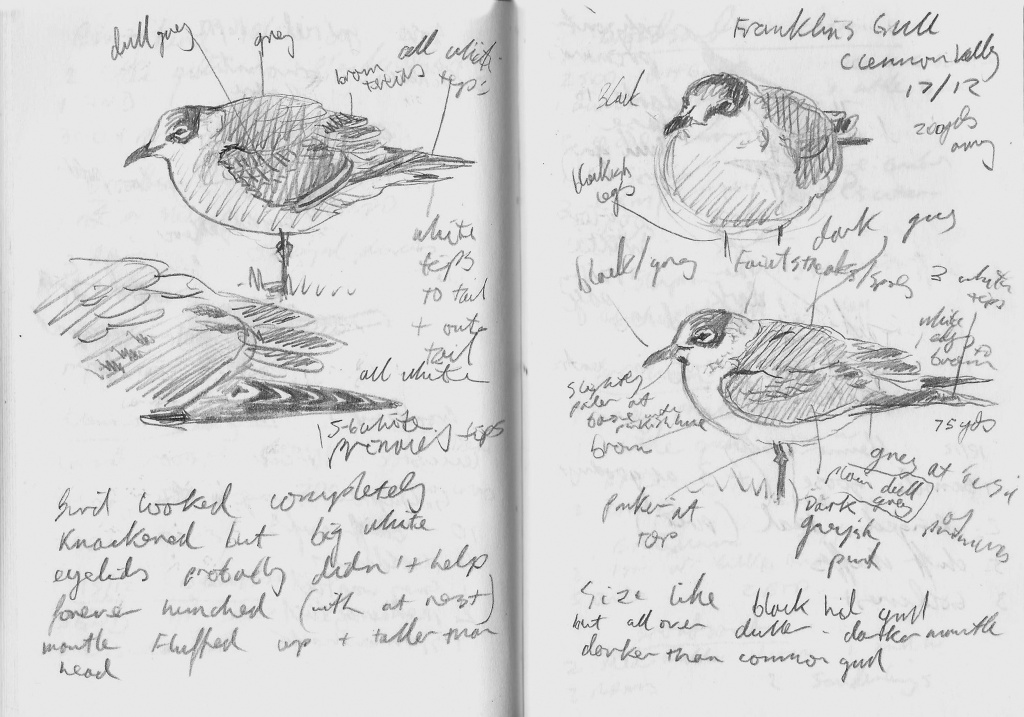 17th December 2000
Found by Mark Bailey while I was swimming in the leisure centre pool just 300m away. It disappeared after 2 days after I had seen it from my bedroom window! Luckily I relocated it among the gull roost over a month later, it then returned every evening for over a month. 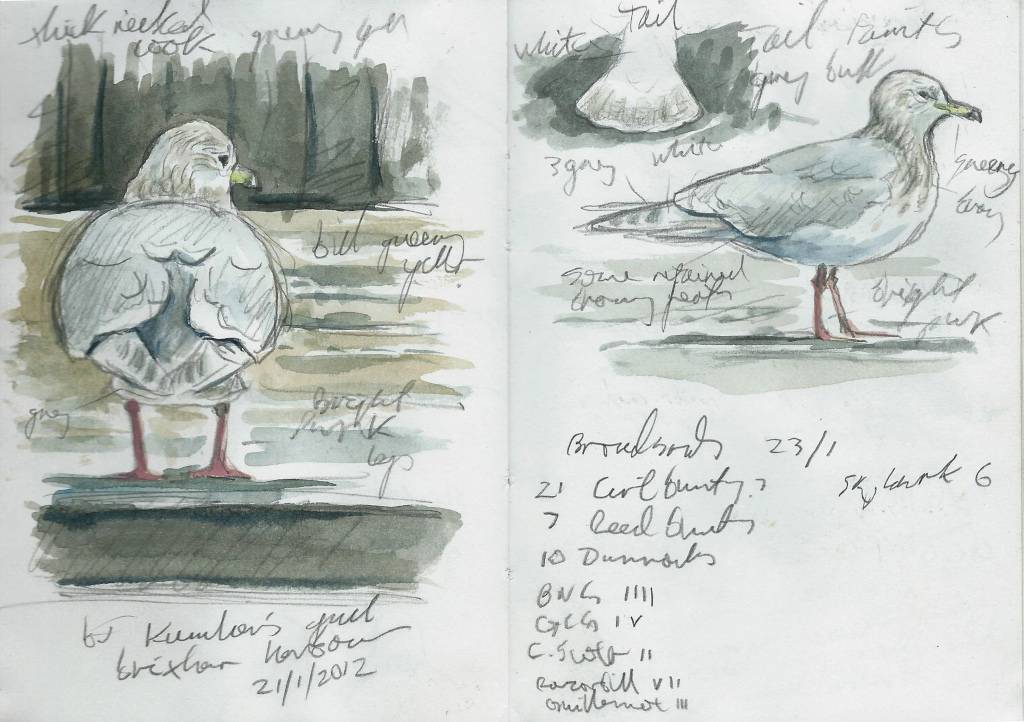 21st January 2012
Iceland Gull are fairly regular in the Brixham harbour area but a near adult Kumlien’s Iceland Gull was a great bird to see found by Tom Whiley. 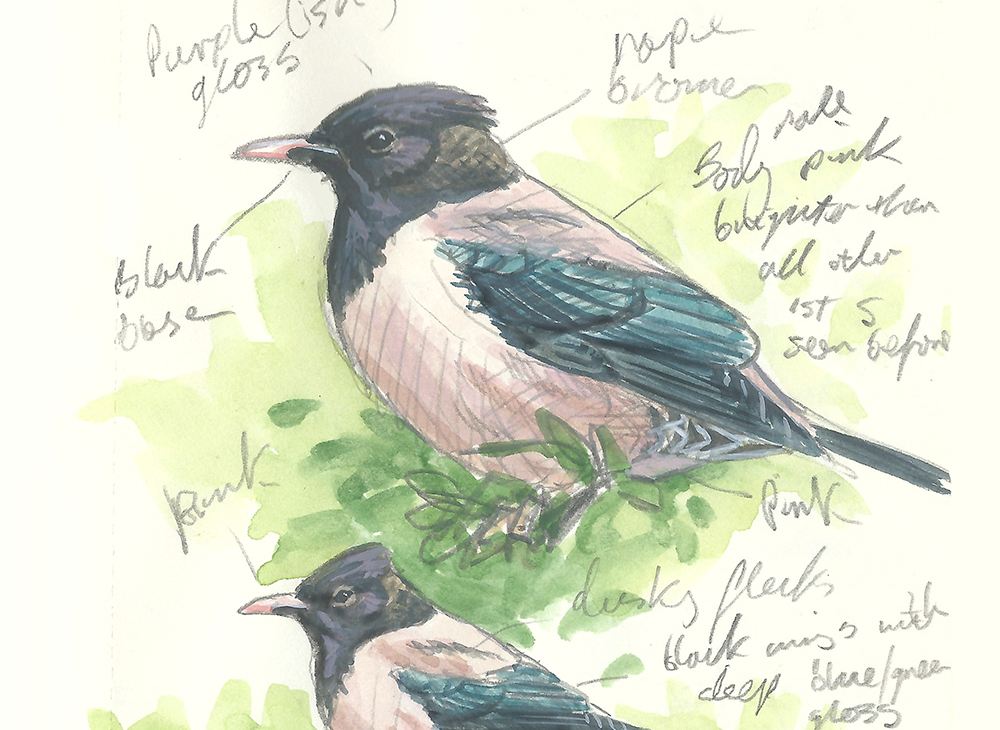 11th June 2001
My parents were on holiday, I was checking the house every day or so when their neighbour said he had seen a Rosy Pasteur (even older name for Rose – coloured and now Rosy Starling). I waited 30 mins watching from my parents’ house before the bird dropped into their garden. It remained for over a week and was seen by many. 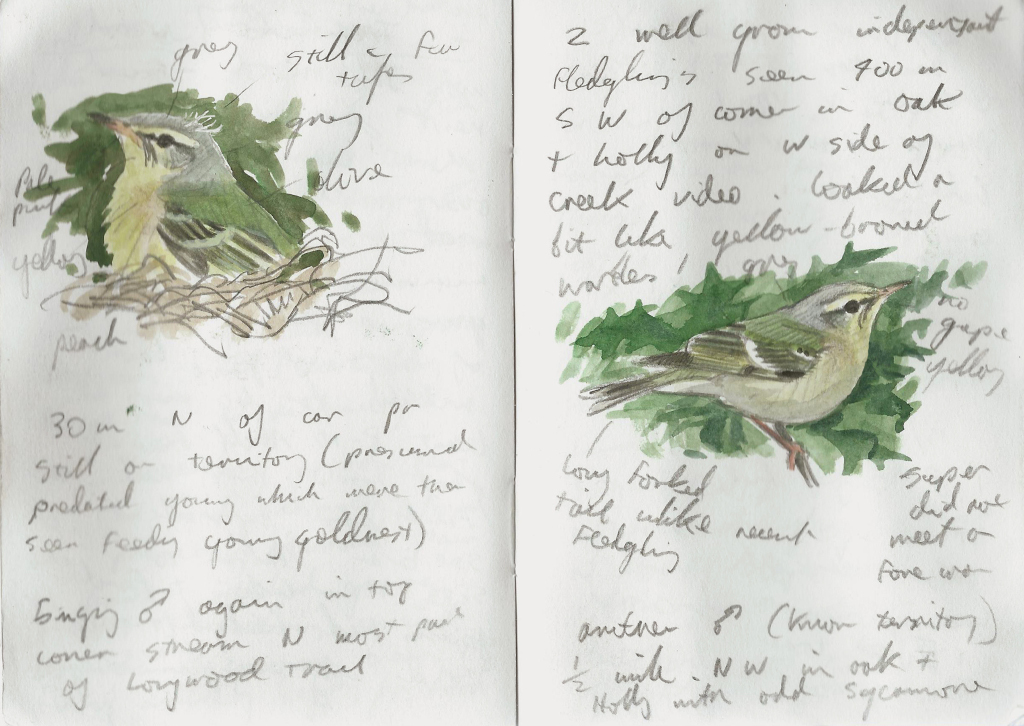 4th June 2014
Although Firecrest had been suspected of breeding in Devon there had never been any proof. In early May 2014 during a casual walk along the dart Valley I discovered multiple males and indeed pairs singing in the woodland areas. On the 1st June I discovered a pair feeding young at one site then on 4th June whilst out with Jake Wood we discovered a nest with near fledglings that were hopping onto vegetation around the nest.

This website uses cookies to improve your experience while you navigate through the website. Out of these cookies, the cookies that are categorized as necessary are stored on your browser as they are essential for the working of basic functionalities of the website. We also use third-party cookies that help us analyze and understand how you use this website. These cookies will be stored in your browser only with your consent. You also have the option to opt-out of these cookies. But opting out of some of these cookies may have an effect on your browsing experience.
Necessary Always Enabled
Necessary cookies are absolutely essential for the website to function properly. This category only includes cookies that ensures basic functionalities and security features of the website. These cookies do not store any personal information.
Non-necessary
Any cookies that may not be particularly necessary for the website to function and is used specifically to collect user personal data via analytics, ads, other embedded contents are termed as non-necessary cookies. It is mandatory to procure user consent prior to running these cookies on your website.
SAVE & ACCEPT